After doing laundry and catch ups with other guides, I loaded up station wagon and headed south.

Drove to Winton via Lumsden and then out to lake Hauroko via Nightcaps and Ohai. Very taken with Ohai, lovely spot.

A couple of other campers at Thicket Burn Camp Ground when I got there.

Sunday drove down to lake and did a 3 hour hike to a look out was awesome. Listened to an audio book on way in.

Stayed in Te Anau a night then home to Queenstown today.

Went to lake, where it was very busy. Missing home a bit today went to movies saw “A star is born” so so.

3rd day of training, Friday we had first part of morning in office with senior guides doing some team work stuff. Then out to airport on bus for helicopter training, this involved learning how to pack a helicopter with tired hikers during bad weather conditions. How to operate safely around them. Was a lot of fun.

Then back to office for physio training, and to get our first aid kits for the summer.

Then off to bar for drink. Seems to be a lot of that.

Pizza on the water front and home to bed.

After an early rise, we bused out to Routeburn and walked to Routeburn Flats Hut. It was about a 6 hour hike with many stops and a long lunch.

This is a truly beautiful part of the country. I will add photos soon.

Red Rock for drinks after then home.

Curl up on the bed and read I think.

Had a very pleasant day. Caught up on some shopping. Spent some time to myself just wondering around. Went for a walk to look at a climbing walls with one of the other guides. All the other guides have turned up, there’s about 12 in the house I think, couple sleeping in cars. Pretty cool lot of people. Looking forward to tomorrow when we will start training so that’s it really.

Saturday the 5th was spent getting the house sorted, fixes and chores I had left undone for too long.

Sunday morning I raced around loading stuff, I mean lots of stuff into the station and put kayak on to roof rack. Don’t much like farewells, so quick hugs and Katharine and I where off. 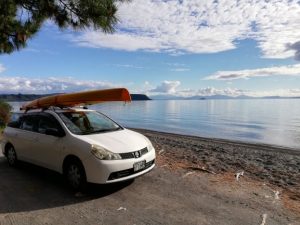 We had a couple of stops along the way and after leaving Auckland about 1, reached Palmerston North at 9pm.

Two night with Mum and Bob, caught up with sister and then a friend and his family. Visited departed family and friends at the cemetery.

Tuesday we left  Palmerston North grabbing a bunch of cheap CDs from the Warehouse, had a quick look for another friends, seems they have moved. Joined the queue for the Bluebridge ferry departing 1.30 from Wellington. Very pleasant crossing, the cabins were great, had showers.

We grabbed a quick bite to eat in Picton, a bit windy so a bit too cold to be site seeing. We reached St Arnaud about 7.30pm found a campsite and set up for the night. Woke freezing cold in Wednesday morning.

On the drive to Fox we stopped for some supplies in Reefton and visited the iSite, very cool exhibit on miming. Stopped for fuel in Greymouth, Katharin was sleeping so we did not stay. The drive to Fox passes a lot of lakes I had no idea were there. Very pretty. It was pouring with rain like I had not experienced for a very long time. We opted not to camp but stayed at the Westhaven Motel. Dinner at the White Pub Hotel and early night.

Thursday saw us drive over Hast pass and into Wanaka and on to Queenstown. We were booked at the Mercure, and quite whacked from travel we had KFC and an early night. 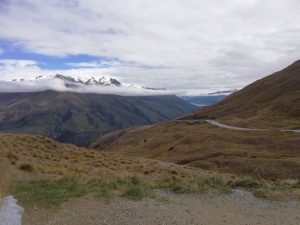 Friday we did the Skyline Gondola where I brought an annual pass. It snowed while we were up there and was absolutely beautiful. 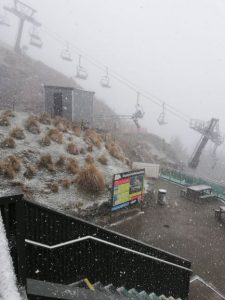 We also had lunch with Kelly in Clyde, very pleasant. My roof rack broke and stranded my Kayak in Clyde.

Saturday we woke to snow on the hills. 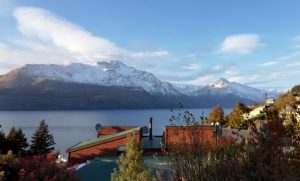 We checked out of the hotel and went for ride with Kjet, which was like being a fresh chicken in a freeze blast furnace. Very cold.

2pm dropped Katharine for here flight. Sad to see her go. I spent the rest of the day exploring.  Spent 3 hours at Lake Moke Campsite sorting through what I had brought with me. Got the car a little more sorted and headed to the Mercure for one last night of comfort before moving into guide House.

Sunday I found repco and had no luck with the roof rack. Had lunch in a camp ground, then headed into Queenstown to move into guide house. Was only one here Sunday.

Monday two returning guides arrived while I was sorting my wagon again, putting stuff into storage locker. Midday I got robbed caltex in exchange for lunch, I then got into my walking gear and headed up gondola to be the Ben Lomond Saddle track. Was great to be out for a walk after over a week without walking. My dodgy knee was much better for the rest. It was hot, busy and beautiful. 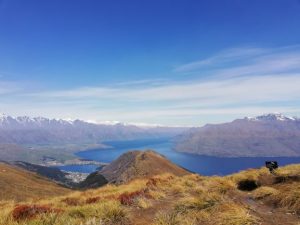 View from the Ben Lomond Saddle.

On my return the house was full of guides, gear and greetings.

We all went for Pizza at fat badger, shared a 20inch with another guide. Huge, way too much food. Lunch for Tuesday sorted.

Welcome to my blog.